It's a Bargain Bin Christmas

Scott Wozniak is bankrupt, so he goes to an agency and makes a deal that if he hosts a holiday charity event, he can become financially unstable instead of bankrupt. When realizing what he could give to the unfortunate, Scott Wozniak obtains an idea while thinking of Kinect Adventures!'s worth. Scott Wozniak proceeds to talk about the 'circle of life', which consists of a particular game releasing, being sold after the completion of said game, being sold again, and being sold another time while reducing its worth in the progress. He talks about the worthless games who just sit in game store shelves for elongated periods, to which he gives them the nickname 'bargain-bin games'. Scott Wozniak talks about the four categories when it comes to being a bargain-bin game: 'Worthless', games that are unplayable nowadays for one reason or another, whether it is that online features are unavailable, or a particular accessory is required to play the game is not included; 'The Yearlies', games in franchises that follow an annual release timeline, usually sports games, that become irrelevant once the next game releases; 'Been There Done That', games are known for their abundance, but are now left dormant, whether it is games that follow trends, or are bundled with a console or controller, games that are significantly low in quality.

It's a Bargain Bin Christmas - Scott The Woz
Video

Scott The Woz - a Bargain Bin Christmas Speed Animation
A speed animation of the animated interpretation of a scene from Episode 124: Desert Island Gaming by Rebaka-Chan

The picture used for the thumbnail 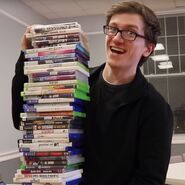 James Rolfe Voiceover: This is the story of a boy who talked about stupid Nintendo games. Ever since 2017, he's done it 149 times and shows no sign of shame. Every single week he'd go Madden 08 this and FlingSmash that. It's really impressive how many sentences he could start with 'Hey all,' Any professionals could make the argument he's gone off the deep end, but I think it's just how he's always been. He just enjoys talking about these things regardless of what situations he gets himself into. Plus, he buys a lot of stuff, like a LOT of stuff, and he says on multiple occasions he evades taxes. like Jesus Christ, I think he does it for fun! But with the Christmas season upon us, his passion may have finally brought him towards a bit of a crisis.

[as the James Rolfe Voiceover speaks, several pictures show Scott Wozniak in different animation styles, reenacting scenarios from the episodes Nintendo Switch Wish List, A Look Back at the Nintendo 3DS, Stop Smoking!, The Worst Games of All Time, Polybius, A Very Madden 08 Christmas, Sonic the Hedgehog 2 | Return of a Laughing Stock, Game Stores, It's Awesome Baby!, The WiiWare Chronicles V, The Game Room, Wii Play | Eh, Why Not?, Desert Island Gaming, and The Great Mysteries of Gaming, then, the pages flick into a real-life shot of Scott Wozniak by his desk]

Scott Wozniak: Hey all, Scott here, and it's that time of year, the spending season, when it's okay to splurge a little bit and say, "You know what, I could use a toothbrush". Yesterday was my 'Go-To Buy FlingSmash' Day. The day before that was the 'Buy The Rights To Socks' Day; didn't pan out, lost a few grand. The day before that I bought a few shares of Loot Crate.

Scott Wozniak: I should probably read the news more.

Scott Wozniak: And today, I'm gonna get my gallbladder removed just for the hell of it!

[in the next shot, Scott Wozniak is now wearing a hospital gown]

[cut to a shot inside a building, where Wozniak is talking with a businessman]

Scott Wozniak: So I was hoping you could help me out a little bit here, according to the bank, government, and wallet, I have no money.

'Kay Swiss: Are you sure? Most people who claim bankruptcy have a forgotten gift card or something.

Scott Wozniak: I was actually gonna ask you to see if you could check my account and see if I left an Arby's card there or something.

Kay Swiss: I don't know what to tell you, man, you're completely broke.

Scott Wozniak: My god! I don't know how this could've happened!

Kay Swiss: Really? You don't know why you're broke? You brought your entire stack of Fling Smash.

[the camera temporarily zooms out, revealing a stack of 25 copies of FlingSmash on Kay Swiss' desk]

Scott Wozniak: Never leave the house without it.

Scott Wozniak: It's a bitch.

Kay Swiss: No one man needs this much FlingSmash. And why are they all wet!?

Retrieved from "https://scott-the-woz.fandom.com/wiki/Episode_150:_It%27s_a_Bargain_Bin_Christmas?oldid=13086"
Community content is available under CC-BY-SA unless otherwise noted.